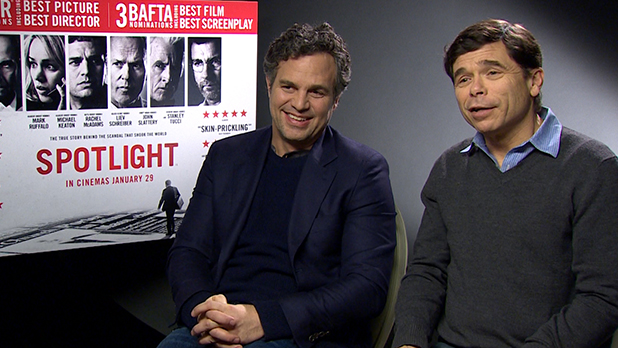 Welcome to this very special episode of Pop Culture Confidential that we recorded live in London where we interviewed several of the greats, in and around, this year’s most talk about films – ‘Spotlight’. The film won ‘Best Performance by a Cast in a Motion Picture” at the SAG Awards, and is a definite Oscar contender for Best Picture. We sit down with Mark Ruffalo and the Pulitzer Prize journalist for the Boston Globe he portrays in the film, Mike Rezendes. As well as Walter Robinson, the Pulitzer Prize winning investigative reporter for the Boston Globe who was portrayed in the film by Michael Keaton, and writer and director Tom McCarthy. We ask – What shocked them most during the original investigation? Has the Catholic Church done enough to stop the cycle of abuse? What was it like bringing the story to the screen? And MUCH more! In 2001 the Boston Globe’s investigation team, called Spotlight, was responsible for exposing the systematic cover up of sexual abuse towards children by more than 70 priests in the Archdiocese of Boston. The series published on the scandal won the Pulitzer Prize in 2003, and now writer and director Tom McCarthy has brought this investigation to movie audiences where we follow the journalists and editors as they uncover the unnerving details of the abuse scandal, the secrecy of the Catholic Church and the power they had over Boston.